After sweating buckets at a local playground, I decided (upon the kids' suggestion) that an icecream treat was in order. I had coupons for free sundaes at McDonald's thanks to our local library's summer reading program, so decided to take the kids there. As we walked in, Bella screams, "Mom, where's the cow? Where's the cow, mom?"
Posted by Briana Almengor at 2:39 PM 1 comment:

We had one of those great blow up plastic pools for the kids to swim in, but we found it would get slimy and full of dirt too quickly. That and a slow leak in it prompted us to pass it along. Instead, we find this does the trick when the kiddos need a little water refreshment: 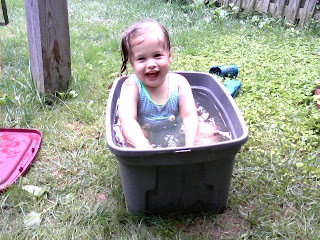 Posted by Briana Almengor at 2:35 PM No comments:

We are observing that our son, Tucker, is a "natural-born" leader. He is an initiator (only for now it usually gets him in trouble). He typically receives much admonishment from us about being bossy, though we trust that one day that will turn into a gentle guiding of others into doing what's right. At least we pray so, and that's what we're aiming to accomplish in our training and discipline of our son.

This week, he's endured a lot of time in the "discipline spot" for helping himself to things without permission, for not appreciating his boundaries as a 4 year old and, instead acting as if he's in charge. We've talked a lot about this especially this week.

This morning, he brought his medicine to me in bed so I could give it to him (something he's learned to do rather than helping himself to his medicine....no, I'm not kidding), and told me he had a surprise for me out in the hallway. He couldn't wait for me to get out of bed to see it. I was thinking it was probably a lego tower of some sort or that he had brought his bowl of cereal upstairs to eat in the hallway (another thing he has done that he's not allowed to do).

Instead, I came out to the hallway to see nothing. That's right. Nothing. Tucker had taken all the dirty laundry from bath night the night before downstairs to our laundry room all by himself without being asked! Well, you can imagine my delight. I praised and thanked him and told him how blessed I was by his servant's heart to bless his momma. His smile could have lit up a room.
Posted by Briana Almengor at 8:27 AM 7 comments:

Here's a link to see some of our Father's Day from back in June:

This morning, I asked the boys to help me put the laundry away by putting their own piles of laundry in their drawers.
Tucker "cleverly" enticed his brother to do the work for him by saying, "Judah, you do the housework; you'll get blessed!"
Posted by Briana Almengor at 8:59 AM 1 comment:

Judah had a follow up appointment with the endocrinologist today. I took Tucker along today and left Bella with a sitter. I am glad that Tucker is now old enough to join Judah on some of his doctors' visits. I am trusting that bringing Tucker along will benefit both the boys in the long run.


Judah's endocrin. visits consistently tempt me with anxiety as it's been confirmed that Judah has a partial growth hormone deficiency, and the recommendation is to treat him with human growth hormone (HGH) shots daily. We have held off on this course of treatment as Judah has shown to be staying on the growth curve and steadily growing since we began tracking it closely about 2 years ago now. Granted, he's only on the 5th percentile, but he's on the chart, and he keeps growing at a "normal" pace. So, the doctor has been satisfied by that and been agreeable with our decision to hold off on beginning the HGH shots.


Today, the doctor reiterated that Judah's IGF1 levels are low (not that that means much to anyone reading this) and that his thyroid levels, though within normal ranges, are in the lower end of normal. When she recorded his growth and charted him in about the 6th/7th percentile, she declared, "his growth is amazing given the clear deficiency in growth hormone." I smile and silently give thanks to Judah's Creator who I know is ultimately in control of Judah's growth.


After asking the doctor if she has seen any other children follow this pattern, she says she has but it's unusual and that eventually, Judah's growth will "poop out" (her words) and match what we're seeing on his blood work.


For today, she was satisfied with taking another blood draw, to our surprise but Judah did remarkably well, and seeing Judah again in 3-4 months for another height/weight check.


Walking out of the clinic today with my little men at my side, I gave thanks to God for His mercy on Judah's life once again. I gave thanks for being given more time to pray and wait in faith for God to heal Judah of his apparent growth hormone deficiency.


On the way to the doctor this morning, Tucker asked if we could listen to worship music (as opposed to the "spanish CD" that the boys typically like to listen to). I was glad to oblige him. He suggested I play, "It is Well With My Soul" for Judah. Very sweet, thoughtful evidence of God's grace on that little guy's life. I have had the kids listen to a Jars of Clay version a lot recently on youtube. We all really like this version, and you can listen to it here: http://www.youtube.com/watch?v=tnLOBwRbg_M


While in the clinic, the boys were coloring in a book the nurse gave to each of them, and ironically, on one of the pages they were asked to write their favorite song. Judah quickly said, "It is Well With My Soul". I am grateful for those precious times when God uses my children to remind me that HE is indeed near. Today we had a few of those moments.

I do want to be able to say, "It is well with my soul" no matter what path God will choose for us to walk with Judah. I do believe that's a part of the work He's doing in all our hearts here in the Almengor home. Thanks for your prayers.
Posted by Briana Almengor at 4:07 PM 4 comments:

My boys were working on "books" of their art for grandma. Tucker wanted to send his to her in the mail. He told me he wanted an envelope to put his name on the front so that grandma would know it was from him and not the mail lady.
Posted by Briana Almengor at 8:01 AM 2 comments:

Briana Almengor
wife.mom to twin boys and a girl. home educator. inconsistent runner. writes to make sense of the chaos in her head and hopefully encourage others as she does. prone to discouragement but fights hard for joy. loves Jesus, coffee and chocolate.